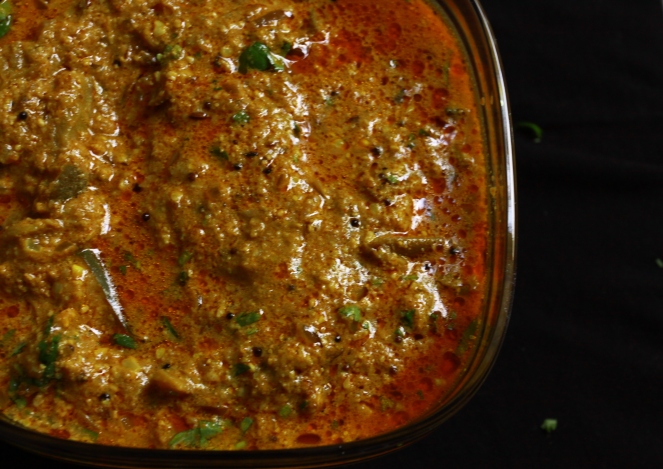 This was an amazing dish made by my friend P to a potluck at least three  years back , but she had made it with peppers. I simply loved the gravy and its tastes with the nuttiness of the sesame and the creaminess of the poppy seeds. This is pretty much a very common dish in all andhra households, but then I wanted my own spin to it. I called her last week and I told her that I really really needed to make that dish which she had brought in to the potluck. I wrote it down on the back of a Trader Joes receipt and safely stashed in in to my bills bin! And then the searcing I had to do, to get it back and try the dish when I wanted!!!!  I made this dish with eggplants and they spun out in to a completely different flavour! When made with peppers, its super aromatic and amazingly tasty too! I am guessing it could be made with bhindi too but that would be an experiment for another day! Try this one and you`ll love the tastes that it brings forth!

Substitute this dish with peppers for another completely different taste of this dish.

The oil seeping out from the gravy is the only point when this dish is done. So allow this to happen and only then switch off the stove.

Your opinions are the windows to your heartfelt views...Keep them coming... Cancel reply

My clicks are on

See my clicks on Tastespotting.

Anubhavati`s Posts in the past…

Daily Dose of Anubhavati in your Inbox???