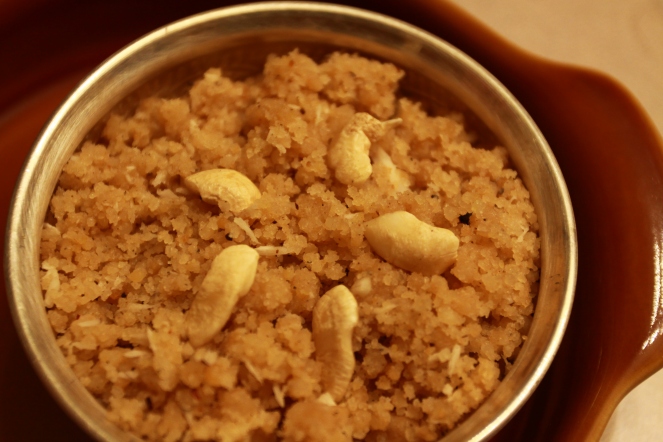 Thirivadharai Kali is one of the most simple of all the neivethyams. It is made with the everyday ingredients available in the pantry. It is also a very healthy option for snack as its made out of rice thats beaten, dry roasted and then steam cooked. Jaggery which is the other ingredient is also a healthy addition to this simple and wholesome preparation.

Every year, the month of “Marghazi” is of very special significance as it heralds new beginnings, the new year, the music season in Tamil Nadu made redolent with the myraid  performances of senior music stalwarts in the various halls, Vaikunta Ekadasi, and of course Thiruvadharai.  When I actually embarked on the significance of this day I found so many different versions, all of them confluencing on the cosmic dance of Lord Shiva.

This festival occurs on the day of the Arudra star in the tamil month of Marghazi, and is of course of special significance to Lord Shiva. This day also marks the auspicious time for Arudra Darisanam – of Lord Nataraja in the Saivite temples all over Tamilnadu.  This celebration is marked by abhishekams to Nataraja and his consort Sivakami during the full moon night, and worship services such as the Deepa Aradhanai to Natarajar amidst the chanting of sanskrit and tamil hymns and the waving of lamps, in the pre-dawn hours, when the moon still shines bright, an enactment of the dance of Shiva, and a grand procession through the processional streets.

Although there is a shrine to Natarajar, in virtually all of the Saivite temples in Tamilnadu, five of these are considered to be the Pancha Sabhais or the five cosmic dance halls of Shiva. The five dance halls are:

The Hall of Gold – Kanakasabha at Chidambaram,

The Hall of Silver Velli Sabhai at Madurai,

The Hall of Copper – Tamrasabha at Tirunelveli and

The usual Neivethyams that are offered to Lord Shiva are Thirivadharai Upperi & Thiruvadharai Kali. The postings will follow in the later blogs.

The Vella Kozhukattais or the sweet modhakas is an all time favourite of mine since I was a little girl. When I was a little girl, we lived in a big joint family so any festival was celebrated  with lots of fun and fanfare. Every year for Vinayaka Chathurthi, Madurai amma would make us the outer dough for us to work on and my sister D and me would make little cups out of the dough, fill it with the “Poornam” and arrange it neatly in little idli plates for steaming. Although we would be longing to eat the neivedhyam, we would have to wait until the entire pooja was over and we would get only 3 or 4.Mum would always promise me that she would make it for us on another day so we could have it to our heart`s content. Of course, that day would never come until the next Vinayaka Chathurthi the next  year…

Now, my daughter S loves them so much that I decided to make it whenever possible, as often as I can. For instance every month for Sankatahara Chathurthi to offer it as Neivedhyam to the Lord. Sankatahara Chathurthi  is an auspicious day dedicated to Lord Ganesha in a traditional Hindu lunar month. It falls during the waning phase of the moon – fourth day after the full moon. Staunch Ganesha devotees observe a fast  on the day.Fasting on Sankatahara Chaturthi begins at sunrise and ends after evening puja or after sighting the moon. Ganesh Temples conduct special pujas on the day.It is widely believed by Ganesha devotees that observing Sankashta Chaturthi will bring material progress, happiness and fulfillment of desires.

3/4 – 1 cup of grated jaggery (Depending on brand, degree of sweetness etc) 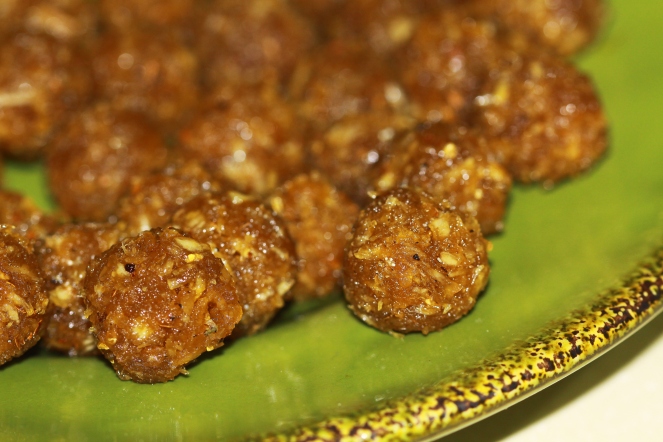 Festivals have been an integral part of our lives and they usher in so much of redundant goodness and positive vibrations. Every festival has its own significance and I try to capture as much as I can with what I have lived with, in my childhood. It`s more an effort to showcase to my daughter all the traditions that I had grown up with, although in many cases it can never be the same. It`s always better with a grandmother in the household, leading the way for all of us to learn. I do miss the fact that my daughter is not growing up in a joint family, with elders to guide and grow with….

Nei Appam is a staple “neivedhyam” for karthikai deepam, avani avittam, Krishna Jayanthi etc. I remember the lovely heavy bronze Appakaral that Madurai amma had with its huge curvy depressions. I have an Appa Karal thats made of non stick and very shallow depressions. I do miss the heaviness and the beauty of the bronze one I am used to.

A little less than 1/2 cup of Jaggery. (I don`t prefer the dripping with sweetness taste)

A pinch of baking soda. 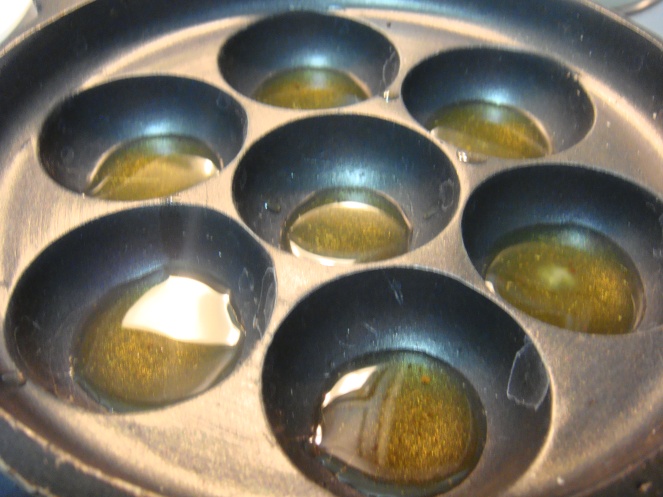 Retried the recipe today and I added 1 spoon of wheat flour and a pinch of baking soda to the ground batter.The results was an  astonishingly crunchy crust with a very soft spongy inner layer!!!

My clicks are on

See my clicks on Tastespotting.

Anubhavati`s Posts in the past…

Daily Dose of Anubhavati in your Inbox???